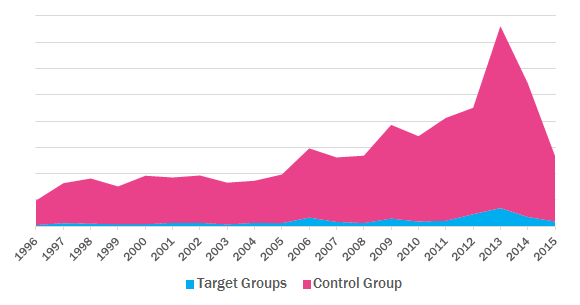 The proportion of attacks against foreigners (Target Groups) and those against Greeks (Control Group) indicates that xenophobic behaviors don’t seem to be dominant in Greece. The event analysis of physical attacks showed that the increase of violent incidents targeting foreigners should be examined in the light of a rise of aggressiveness in general, irrespectively of national identity of the victim. This indicates that financial misery can cause an outbreak of violence. 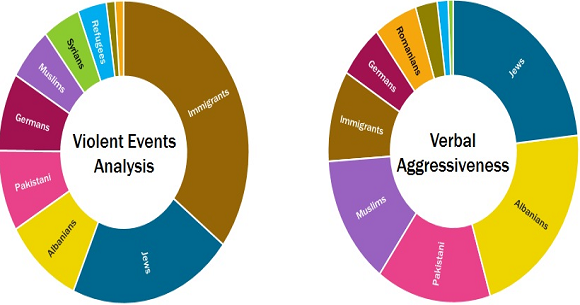 In a quantitative perspective, the most attacked Target Groups seem to be Immigrants, Jews, Albanians and Pakistani. This is the case for both Violent Events Analysis in news and Verbal Aggressiveness in Twitter. This observation is very interesting, as it may indicate possible correlations between verbal aggressiveness and physical violence. 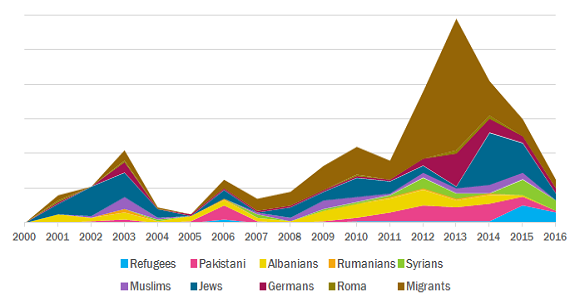 A continuity against certain Target Groups, namely Jews, Albanians and Pakistani, is detected in the longitudinal event analysis. The prevailing of the TG “Albanians” in the VA collections too, can be used as an indication that current xenophobic manifestations are not crisis-driven, but rooted in pre-existing stereotypes and perceptions. Nevertheless, Germans have emerged as a new target, associated with the blame attribution patterns of the Greek crisis. This association is witnessed by the violent incidents against German politicians and diplomats, but also by a qualitative analysis of verbal aggressive messages 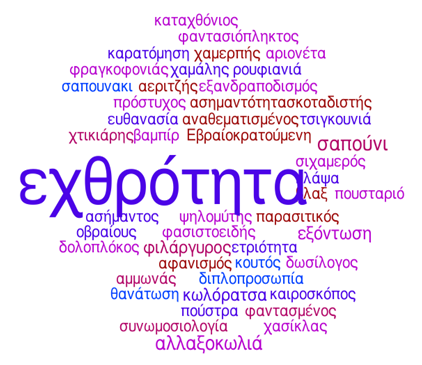 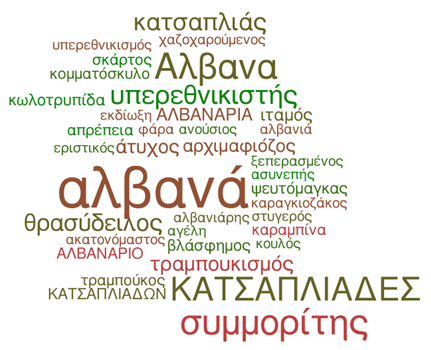 prejudices and stereotypes about the "other"

The qualitative analysis of the content of the verbal attacks expressed in Twitter confirms the existence of stereotypes and prejudices that are deeply rooted in Greek society. For example, the dominant stereotypes in the construction of the image of Albanians are associated with “crime” and “cultural inferiority” indicating a continuity of the so-called stereotype of the Balkanian criminal. In the case of Jews, the verbal attacks entail a perception of a particular enmity towards the Greek nation and blame attribution patterns of the Greek crisis. Common themes in this group are the identification with the negative aspects of the banking system and global capitalism, as well as the frequent appeal to conspiracy theory elements. These observations coincide with surveys that establish a correlation between conspiratorial thinking and ethnocentricism, and elaborate an interpretation of Greek anti-Semitism building on aspects of national identity and by employing the concept of victimhood.